Oregon State president out for handling of cases at LSU 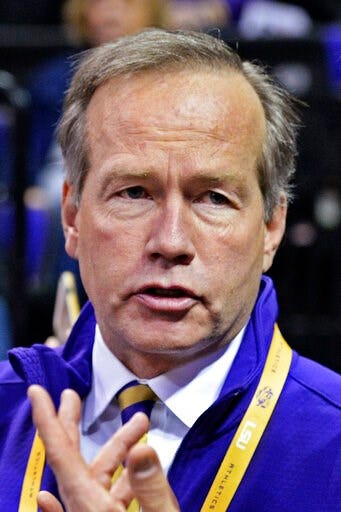 Oregon State’s trustees accepted the resignation of university president F. King Alexander on Tuesday, concluding he was unable to rebuild trust at the school because of his role in the mishandling of sexual misconduct cases during his previous tenure at LSU.

The Oregon State board of trustees had placed Alexander on probation last week, but on Sunday, it received his offer to resign, effective April 1.

Board chair Rani Borkar said the outpouring of comments since the probation decision from students, alumni and people who have alleged sexual misconduct led the board to realize “that rebuilding trust is no longer possible.”

The board voted unanimously to accept the resignation.

Alexander, who will be on administrative leave until his departure, said he was sorry to survivors of sexual abuse.

“I offered my resignation to allow us to move on,” he said in a statement after the board’s vote. “Students have and always will be my top priority.”

Borkar said “we admit when we make mistakes and we always seek to improve,” and her thoughts were echoed by the rest of the board.

“I know it triggered a lot,” board member Lamar Hurd said, as he choked back tears. “I know there’s a lot of discussion around how too much gets overlooked. But I want you to know it wasn’t overlooked. I haven’t been sleeping well.”

An investigation into LSU’s response to the misconduct cases found system-wide flaws in the school’s reaction to allegations during Alexander’s tenure there from 2013-19. Alexander told the board last week he was never interviewed by the law firm that did the investigation.

But in an extraordinary move, the chair of LSU’s board sent a letter to Borkar on Monday, saying Alexander denied requests to be interviewed and only would respond to questions in writing.

LSU board chair Robert Dampf said Alexander’s testimony last week to Oregon State’s trustees left him “beyond offended by … arrogant and condescending comments about Louisiana’s culture, our state and our university.”

The board agreed to a severance package that will pay Alexander $630,000 and an additional $40,000 in relocation fees.

The president came to Oregon State last summer, before the mishandling of the misconduct charges at LSU were brought to light.

Also revealed was a 2013 investigation into the former football coach, Les Miles, who was banned from contacting female students after a report found he had acted inappropriately with a few of them.

Alexander said he was aware of the Miles report and didn’t feel comfortable with him as coach but that the LSU board had decided on his status before Alexander arrived there in 2013.

“Now the real work towards healing and rebuilding trust can begin,” she said. “Survivors and advocates have a detailed, actionable plan that simply needs administrative funding and support to put in action.”

Copyright 2021 The Associated Press. All rights reserved. This material may not be published, broadcast, rewritten or redistributed without permission.